Halloween apps for a fun, frightening, and safe October 31st! 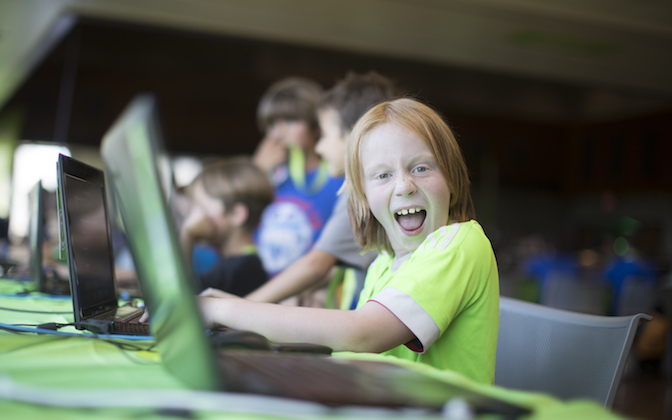 My phone is always on me—and yes, I check it more than I probably should.

And that’s on a normal day or night.

So why wouldn’t I want my phone with me on the night that is as far from “normal” as you can get—Halloween?

There is no reason.

There are, though, many reasons I’d sprint back to my house to retrieve my phone if it was left behind (and I’d be sprinting to get to it quickly... not because dark neighborhoods filled with costumed kids and teens are scary).

For one, phones have flashlights, which come in handy on those aforementioned dark streets.

And two, phones have cameras, which are necessary for capturing the moment your little one was “treated” to floss from your dentist neighbor.

But three, and the basis for this post, phones have a ton of apps—many of which can be useful for you and the kids before, during, and after they go door-to-door asking for candy (and hoping for anything but an Almond Joy or Mounds bar).

Deciding on a Halloween Costume

Deciding on a Halloween costume gets progressively more difficult the older you get. I remember being completely OK with alternating between Ninja Turtle Michelangelo and “pro baseball player” for six years straight as a youngster.

These days, costumes are cooler, there are more options, and they're widely available either in-store or online. The costume bar has been risen.

Luckily, there are a number of costume apps to help your decision, allowing you to basically upload a picture of yourself, and then test your look across different outfits and makeups—from menacing monsters, to your favorite movie villains, plundering pirates, or if you really wanted (but why would you want to), clowns.

Virtually throw on a variety of different costumes, or even apply face paint to get a better feel for if you're on the right track with your ideas.

Which costume app is best? Honestly, there aren’t many that have user ratings and feedback (a sign of seasonality).

But, I tried a few. (Be warned—it seems like most of these have a ton of ads built in, etc., so I can’t really speak to or vouch for the content displayed).

Spookify from Party City (iOS, Android)
A name you recognize, at least, with Party City! You can use the app to “try on” costumes, and it also has photo filters for wigs, masks, and makeup. 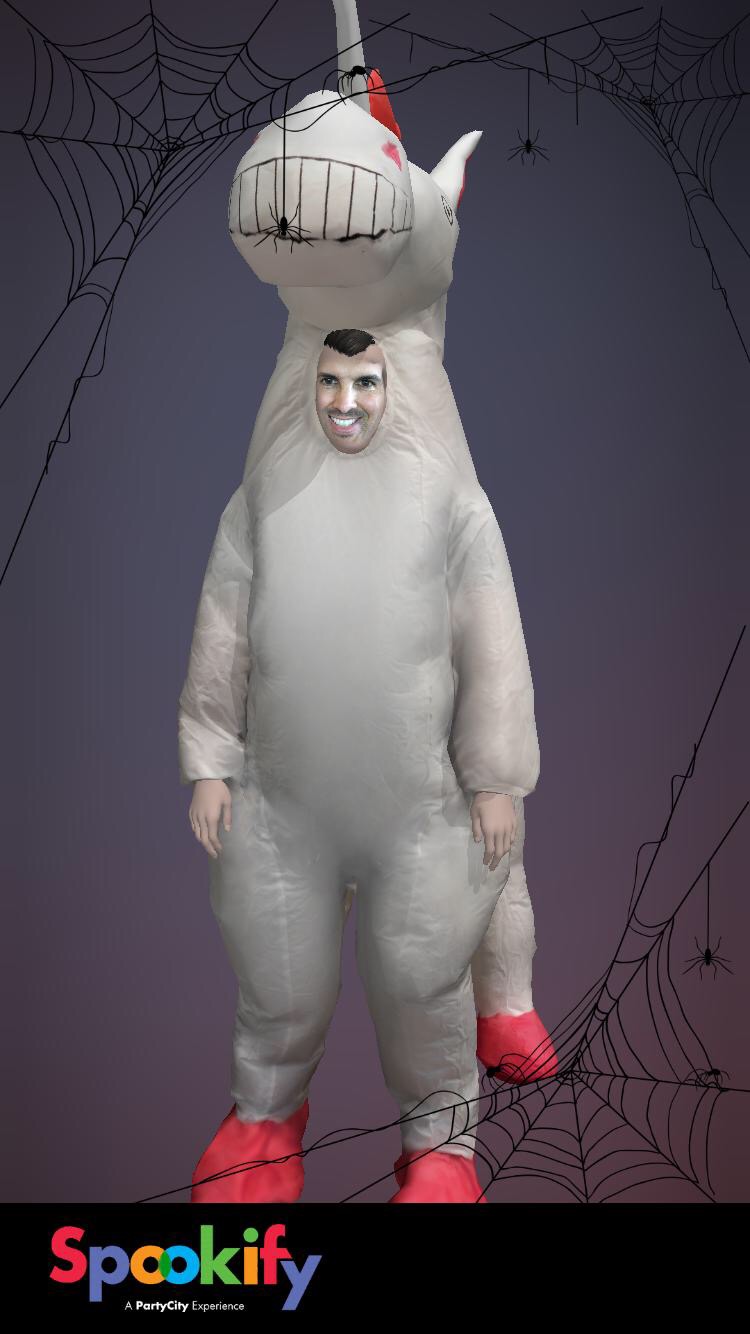 The app even has an augmented reality component, that has graciously added this creepy box of toys to my home office: 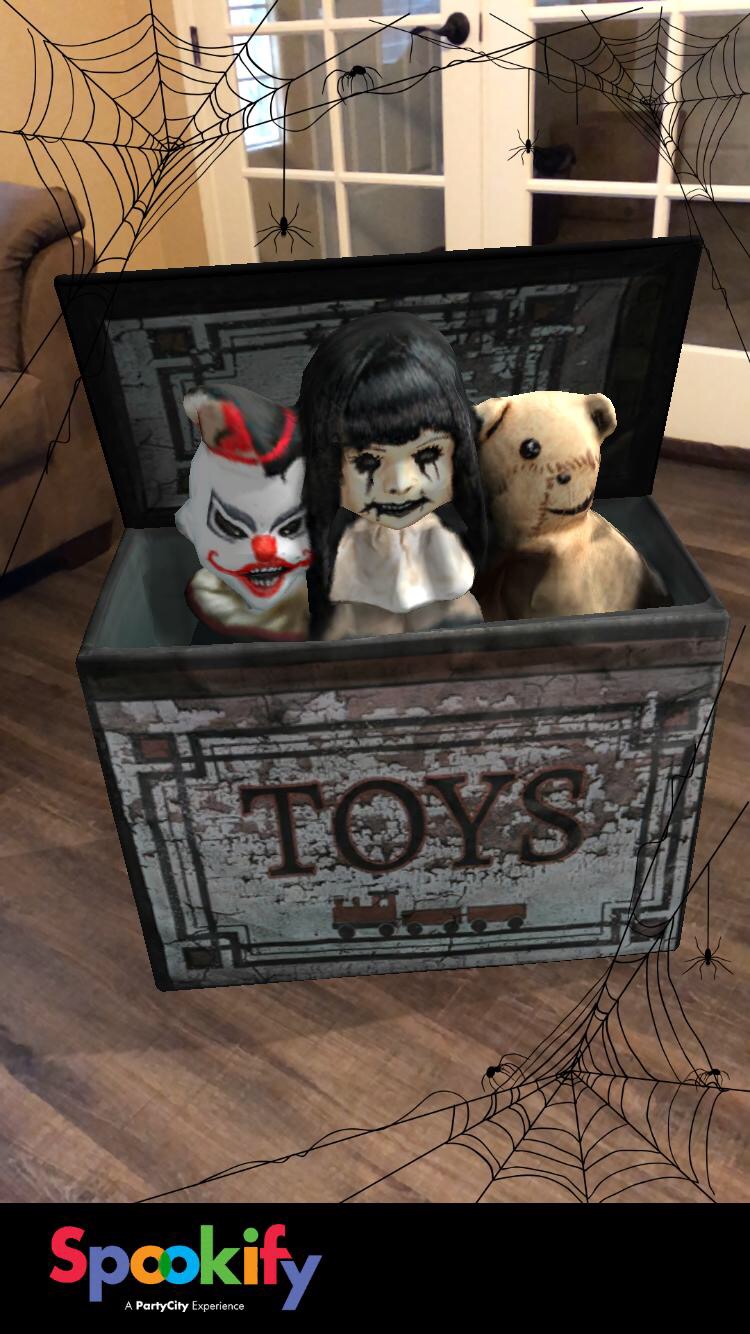 Zombie Booth (iOS, Android)
If makeup is more your focus, and you're aiming to be a little more frightening than a puffy unicorn, Zombie Booth could definitely satisfy in both instances. 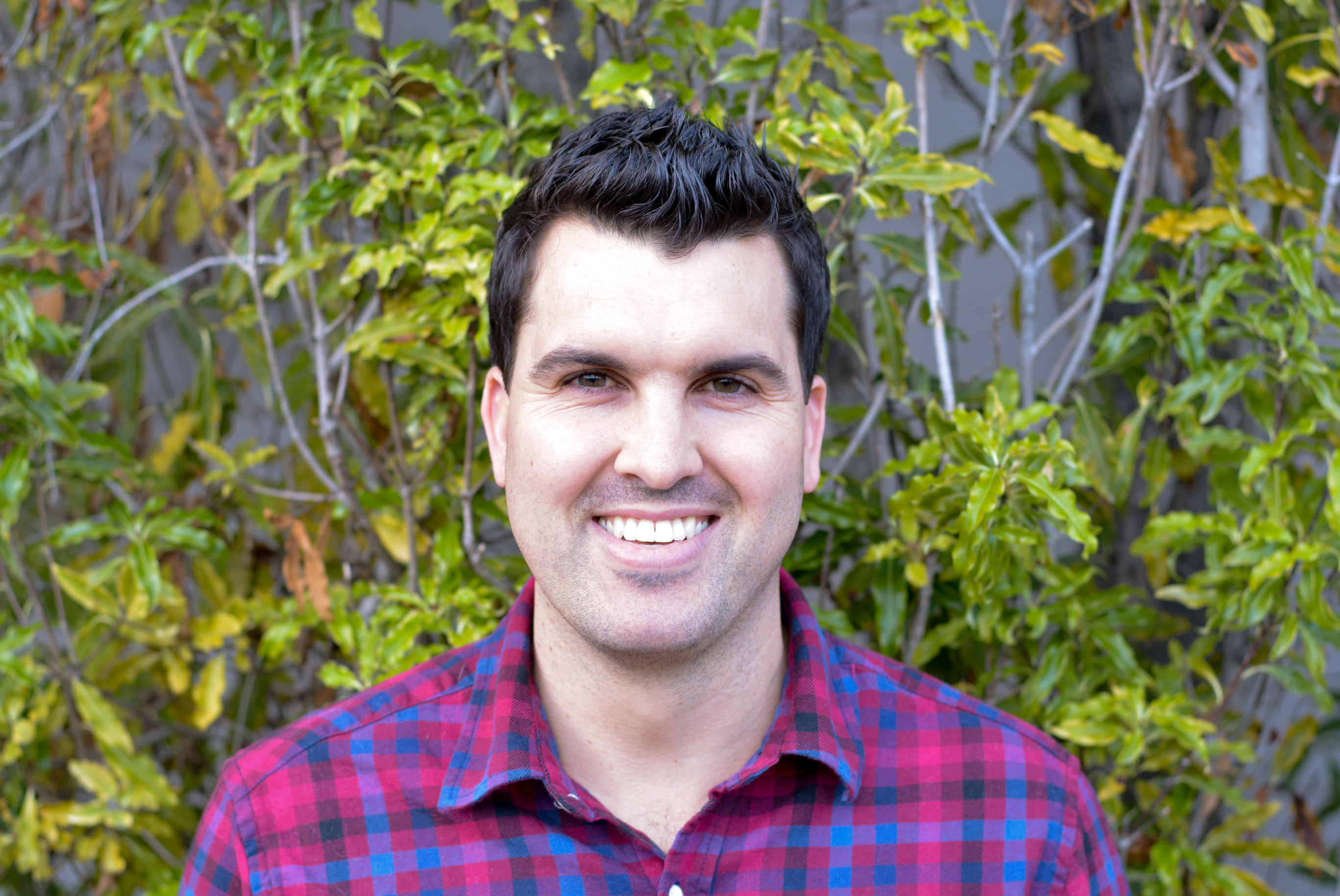 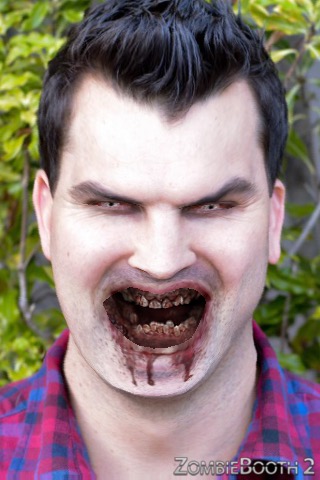 Corpse Cam (iOS)
If you wanted a little more variety, you can move beyond just zombifying yourself and instead try on any of the many crazy and spooky faces available from Corpse Cam. 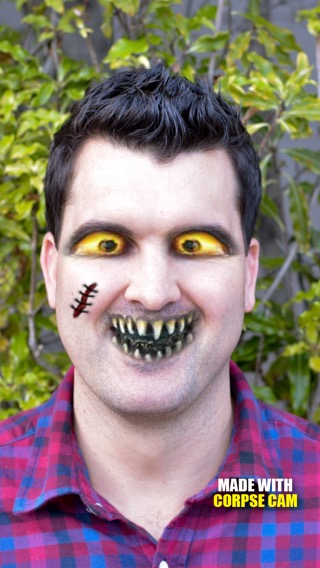 (Yeah. I think I might just revisit Michelangelo this year. )

Once you’ve figured out what you want to be, it’s time to find that costume! And luckily, when it comes to buying a costume, you can find them anywhere this time of year.

Even the grocery store.

And even at the building that used to be a grocery store, and has been empty for months, but is now a Halloween Superstore that just seemed to appear out of nowhere.

Etsy (iOS, Android)
If mass produced isn’t your thing, and you like the challenge of finding a costume you can’t just pick up anywhere; something a little different or unique, or a costume with the flair of a personal touch, check out an app like Etsy. You can “shop for anything from creative people everywhere.”

No crazy monster masks here (thankfully). If you’re into making your own costume, it’s also a great app to see how different, classic getups can be reimagined. 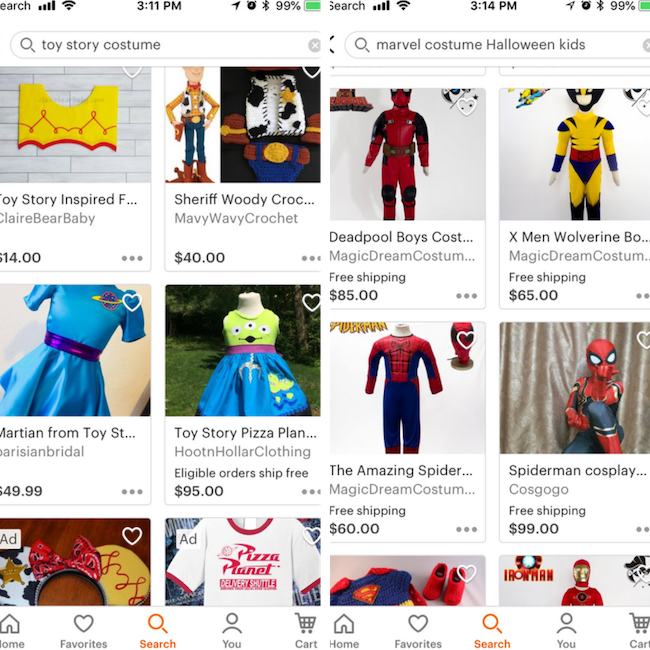 Pumpkin carving is a favorite Halloween activity. You get to go to a patch or store and pick the perfect pumpkin, take it home, scoop it out, and then carve a face or image in it before showing it off out on your porch.

So, then, why would you need an app for any of this?

Believe it or not, some don’t like the gooey mess a pumpkin can create, and of course, the actual carving involves using a knife or other sharp objects, which require strict supervision...bso having some fun on an app is a lot safer. Or, you can even use the app for ideas and practice before the real deal.

Carve a Pumpkin from Parents magazine (iOS)
This cool app provides that safe and mess-free way to make jack-o-lanterns with the whole family.  Pick from a variety of eyes, mouths, and noses, and easily share your creation with friends. (Now, if only these app makers could figure out how to replicate baking and eating of those delicious pumpkin seeds.)

There used to be a handful of Halloween-specific tracker apps that informed parents of their kids’ whereabouts throughout the evening.

Now, there are many ways to track your kids and teens that are native to apps or features already installed on your smartphones (much to your kids’ chagrin, I’m sure). Perfect for those of you who are sending kids out for a candy quest on their own!

Google Maps (iOS, Android)
Google Maps is one such app, and I’d bet the vast majority of you already have this installed on your device.

To use the tracking feature, go to the hamburger menu (stacked three lines) located to the left of the search box, and select “Location sharing.”

Then, click the start button, set your duration, and then select a contact from your phone or send a text to that person. 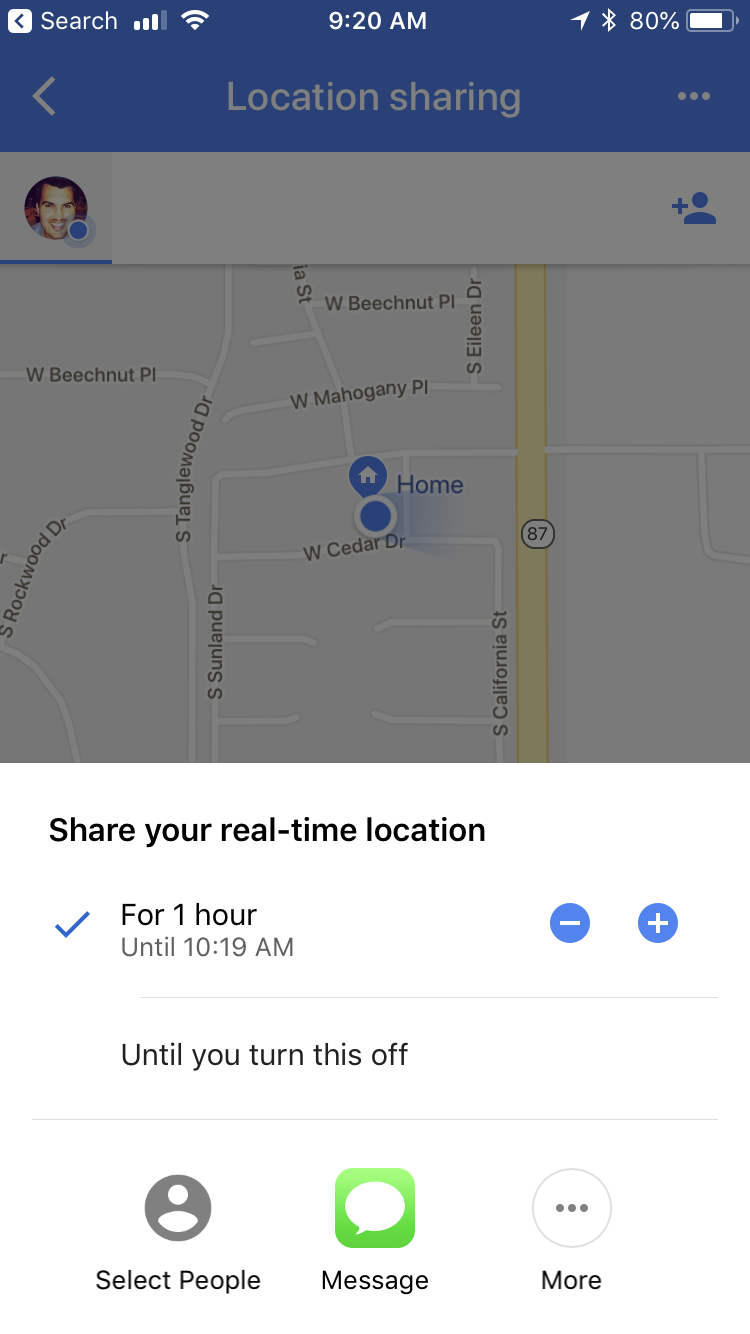 Find My Friends (iOS)
The Find My Friends app was developed by Apple, and actually bundles with the operating system, so again, it might already be installed on your device.

It functions similarly to Google Maps above, where you simply need to walk through a couple of steps to get going. Both you and your kids must have the app installed, but from there, it’s an easy process of adding a contact and having that contact “agree” to share their location.

Then, when you want to check in, you just open the app and wait for your kids’ location to load, and you’ll be able to see exactly where they are on the presented map. 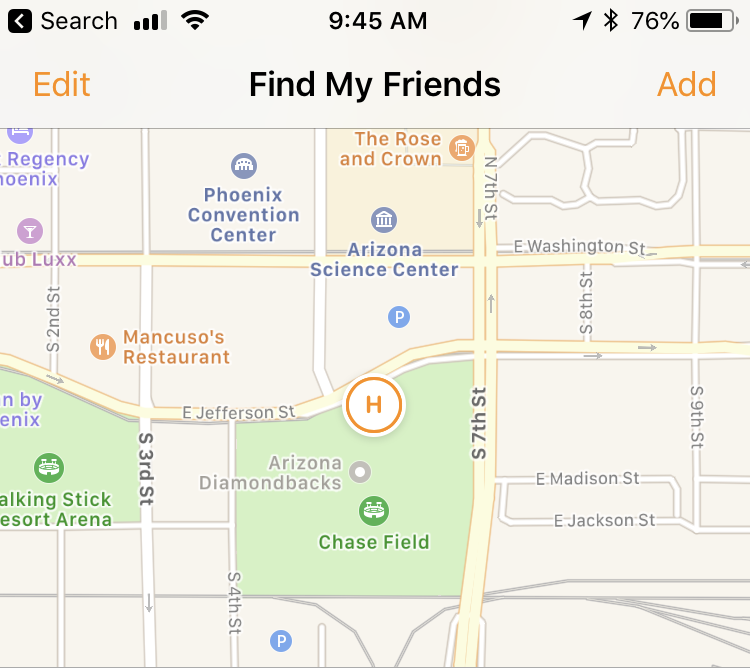 On Halloween, some take pleasure in dressing up and putting together the craziest, most unique, scary, or realistic costume imaginable. Others like the candy.

Beyond that, others like to scare people. I’m one of those people.

I almost hung up my scaring shoes after jumping out and terrifying my great-grandmother when I was younger; a move that was meant for who I thought was my sister coming down the hall.

But I continued on, and before it was cool and “for YouTube,” I would sit on my porch in a gorilla costume, pretending to be fake until jumping at trick-or-treaters.

If only I had a cool sound effect app to help me!

Halloween Sound Box (iOS)
This app has all the terrifying sounds you’d ever need or want to create. From horror organs to witch cackles, you’ll be equipped with more than your share of scary audio. (WARNING: Some of the sounds are, well, gross. And, by all means, again, stay away from the clowns.)

After a long night of encountering everything from the pointy Freddy Kruger to the pasty Michael Myers, a nice, light, happy bedtime story is always welcome.

The kids would probably enjoy one too, so why not fire up your trusty smartphone one last time before the night is over?

Here are a few classic Halloween kids stories you can sink your teeth into.

Now that Halloween is over and you were successful in finding a costume, carving a pumpkin, and tracking your kids’ nights, it’s time to look ahead to Thanksgiving, right?

Well, before you move on, consider a few “wrap up” items to truly ensure a successful Halloween season.

So, your kids ate some candy. Even if you were successful in wrestling away the pillowcase after the good ole “you can have two pieces tonight, and the rest is going on top of the refrigerator,” you know they already ate a ton while they were out, and getting something off the top of the refrigerator isn’t all that difficult with a little determination.

Toothy App (iOS)
So, the Toothy app is a valuable option to help little ones through the entire tooth brushing process; even making it fun with timers, music, progress trackers, and more! (If you have older ones, and they aren’t brushing their teeth with regularity, well, good luck!) 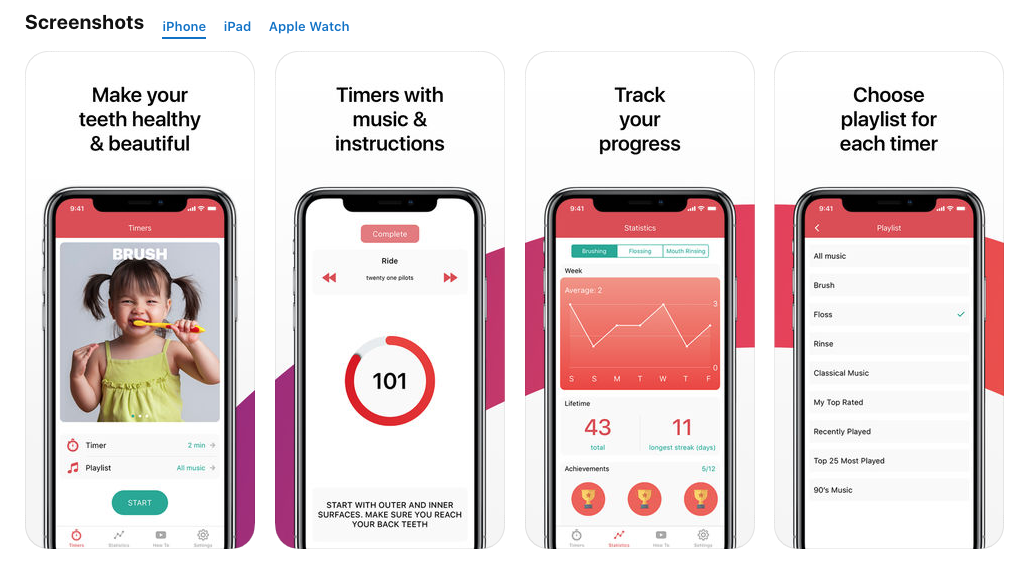 Through all of my years of dressing up (or not really dressing up), I’ve found that if you keep old costumes in the house, you’re more prone to using them. Meaning, knowing that Michelangelo is in the closet stifles the creativity and spirit needed to push you to really go out and do something cool.

So, sell your costumes after you use them! eBay is a classic marketplace example, but check out these newcomers for a quick and easy way to close this year’s costume chapter, and even make a little money while doing it.

OfferUp (iOS, Android)
Think of OfferUp like Craigslist, but with a more structured, visually-appealing approach. People post stuff they want to sell, and buyers make offers on those items until a deal is reached.

You can also check seller/buyer profiles and ratings, suggest “safe” meet-up spots, and more. OfferUp also introduced the ability to ship items through the app, so think of it like eBay in that regard.

Mercari (iOS, Android)
Mercari functions very similarly to OfferUp, except with this one, you don’t have to worry about meeting up at all with anyone to complete a transaction, as everything must be shipped. Just list your item—which only takes 30 seconds—select whether you want to ship for free or have the buyer pay for shipping, and you’re on your way!

Halloween should be fun, of course, but stay safe out there! Hopefully, these apps will help you and your family accomplish both.

Ryan manages blog content at iD Tech, starting with the company in 2008. He earned his MBA from Santa Clara University after obtaining his Bachelor’s degree from Arizona State. Connect on LinkedIn!

iD Tech is the #1 tech camp on the planet, held online and at 150+ global locations - held at Stanford, NYU, Cambridge, and more - offering 50+ innovative tech courses.