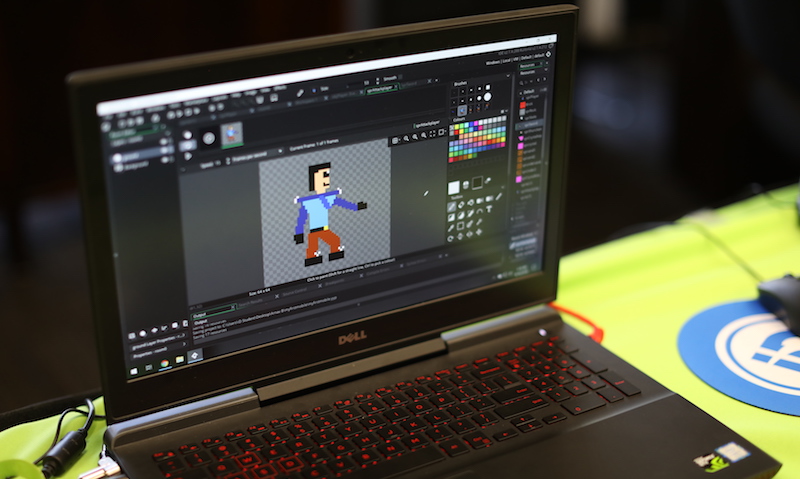 How does racing through a city under alien attack, desperate to find an escape sound? Or battling giant bridge monsters that are hampering a quest for the crown?

With an RPG, your child can bring original characters to life, and create their own stories based off branching dialogue paths.

And when it comes to RPG Maker MV, aspiring game makers have a number of game-making options at their fingertips!

Specifically, RPG Maker MV is a powerful tool that can help designers construct different types of games—from RPGs with epic battles, to adventure games with interactive cutscenes, point-and-click games with engaging dialogue, or even visual novels.

An RPG (role-playing game) is one of the many types of games, and is driven by story, but also focuses heavily on gameplay. Heroes can explore dungeons and towns, fight against enemies, and engage in boss fights (the pinnacle of most video games).

Undertale is an excellent example of an RPG with a fun battle system. Check out the trailer below:

Night in the Woods is a great example of a story-driven adventure game.

Point-and-click games are similar to adventure games in that they can have branching story paths, but differ by focusing heavily on visuals and allowing designers to draw their own assets (characters, objects, backgrounds, text boxes, and more).

As a result, point-and-click games are more time-consuming than adventure games or RPGs, so kids should only choose this option if they are looking for a greater challenge!

Check out the trailer for Day of the Tentacle Remastered, a point-and-click game that has an involved story and graphics with personality.

Last, visual novels - as you might have guessed - are almost entirely stories, with the main gameplay aspects of these based exclusively on the choices that the player makes. If any exploration occurs in visual novels, it will likely be done in the same style as point-and-click games.

Also no surprise, visual novels are image-heavy, so are only recommended for artists who plan to spend a lot of time drawing characters and backgrounds. Logistically, these developers will follow the same path as the point-and-click developers would in RPG Maker.

Design Hero is a good example of a visual novel with stylistic interfaces and detailed artwork.

To provide examples and inspiration, all of the below were created using some form of the RPG Maker engine!

To The Moon is an adventure game created in RPG Maker XP by the Canadian studio Freebird Games. In this story-driven game, you play as two doctors who are helping a dying old man relive his life and best memories.

OneShot is a puzzle adventure game developed in RPG Maker 2003 by Little Cat Feet. This game is about a cat named Niko, who is the supposed savior of this world. Niko’s goal is to place a light bulb, known as the sun, on top of a tower.

OFF is another creation from RPG Maker 2003, developed by the Belgian team, Unproductive Fun Time. It's about Batter, a baseball player, who adventures through various zones to purify the world from malicious ghosts.

As you can see, the game-making opportunities are endless for any creative mind with the inspiration and drive to transform their ideas into playable realities.

One of the next best steps then is for aspiring designers to get more familiar with the tools they have at their disposal.

Getting familiar with maps in RPG Maker

The map in RPG Maker is the main component of any game creation, providing areas for characters to explore and for adventures to unfold.

For instance, characters can sleep at an inn, recharge with potions purchased or bartered from a shop, or fight dragons for sweet loot—each of which takes place on the map that houses it all.

To create a map and environment that best suits their game idea, designers will want to get familiar with the RPG Maker interface and properties.

When creating a map, game makers can place towns, mountains, and other geography. So, depending on ambitions, designers may want a relatively larger area with different types of terrain, etc. This is where properties come in.

This is where each map is named (game players won’t see this...it’s just to help designers remember the map in the editor).

When a player is in-game and entering a map for the first time, the display name will be displayed in the upper left-hand corner.

This is the amount of tiles a map is tall. The width and height values can be adjusted to whatever size needed for the game being created, but 50x50 is a good start for a larger map.

The tile palette offers a variety of tiles that can be placed on a map in order to add various terrains and objects including grass, water, trees, mountains, and more. 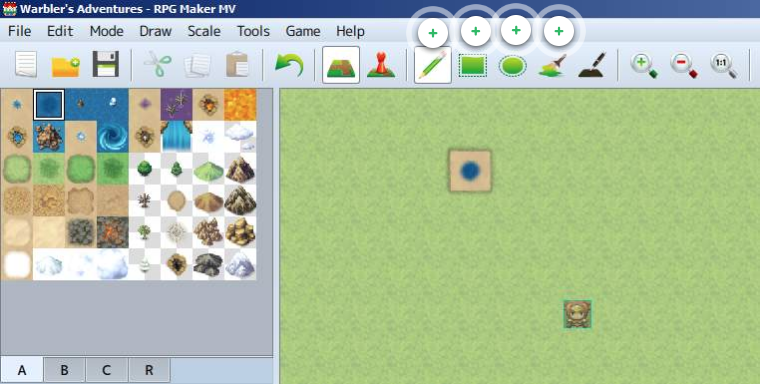 When tiles are placed, the map's squares take on the terrain’s properties. For instance, grass can be placed across as many map tiles as desired.

The tiles represented by white and gray checkered patterns, though, are “transparent tiles” and show the tiles that have yet to be filled.

As the name suggests, the map list is a list of the different maps available in the current project.

Event mode allows for events to be edited, which are characters or other objects on a map with which a player can interact.

Here, game actions can be added, including anything from a treasure chest to character dialogue.

Game designers can also draw on a map, using the pencil (a freehand drawing tool), rectangle, ellipse, or flood fill (which fills an entire space with the selected tile) tools.

When creating a map, designers should keep the following in mind:

For instance, imagine Pokémon without any characters. There wouldn’t be any trainers to battle or monsters to collect... it'd just be an empty world with lots of vacant gyms and tall grass, without any of the fun you expect from the series!

When creating characters, designers should think through the following:

When building a map or creating a character, one thing designers may find themselves faced with is a character who is suddenly stranded in the middle of the ocean, or stuck up high in a mountain or tree.

(As one could imagine, to be able to play a game, players must be on land!)

Luckily, RPG Maker has a built-in feature to remedy this.

Designers will need to set the player's starting position to play a game, and they’ll want to place characters on plain grass, dirt, or stone (objects a character can easily walk through), while refraining from starting them out on top of buildings or mountains.

In addition to players, game creators can place vehicles like boats or airships! 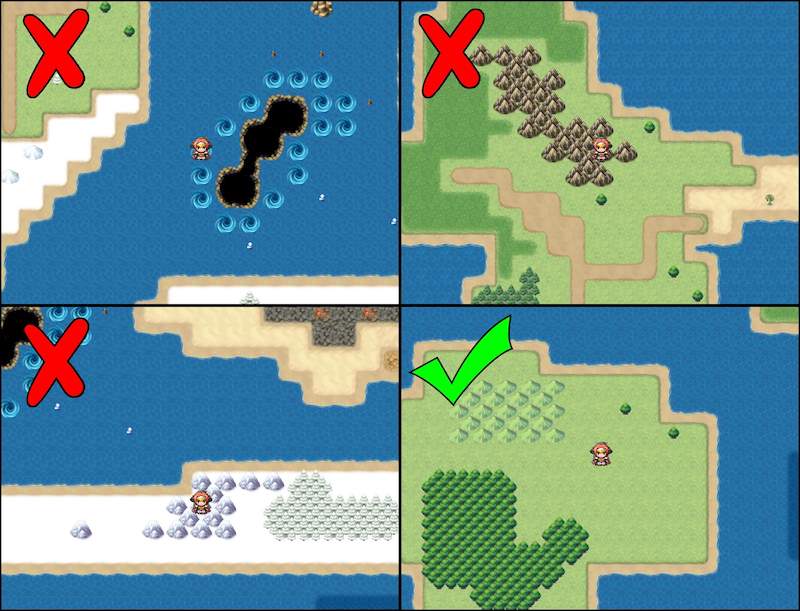 Once a milestone is reached and a game is ready for outside feedback, designers will engage in what is called playtesting.

Playtesting is exactly what it sounds like—playing a game to test it. During which, the designer will want to check if the game is even playable. Or is it buggy? Is it too easy or hard?

This is a necessary part of making a game. I mean, imagine sitting down to play a new game, getting 10 minutes in, and then discovering you can't do anything to progress.

Just like writing needs multiple revisions, games need a review and feedback process to ensure they can be enjoyed as intended.

The above was a quick look at the main components required of any game created with RPG Maker. What follows is a process primer on the different steps a designer can take on their way to completing their creation.

Keep in mind—when creating a game, there are many additional details, ins and outs that need to be navigated, and a variety of other capabilities available to those wanting to make a working, entertaining title. This is stated in order to set expectations, and give creators an idea of how they might be able to traverse the process.

Planning a project helps provide a path to follow as work unfolds. Having a thought-out plan also serves as an important reference to ensure designers are staying true to their original vision.

Thus, if planning doesn’t take place, designers might find out midway through their work that a piece of the project just isn't right. If this error is big enough, it could cause the project to be restarted or even potentially stopped. That would be a huge loss of resources!

The game's theme is simply what the game is about.

What is the experience you want to provide for the player? A strong theme is only a few words, and begins to give life to an idea.

For instance, In The Legend of Zelda: Breath of the Wild, the player spends most of the game exploring on their own. There are many ruins dotting Hyrule; lots of broken machines, and you have to survive against the elements without much help.

Thus, one possible theme for this type of gameplay could then be “lonely exploration.”

While it's tough to settle on one single theme, games can have multiple themes associated with them. However, no matter how many themes are assigned, there's still one theme at the heart of each game.

Designers should also keep in mind that multiple themes will add complexity to their game, and will also require additional time and resources to complete. 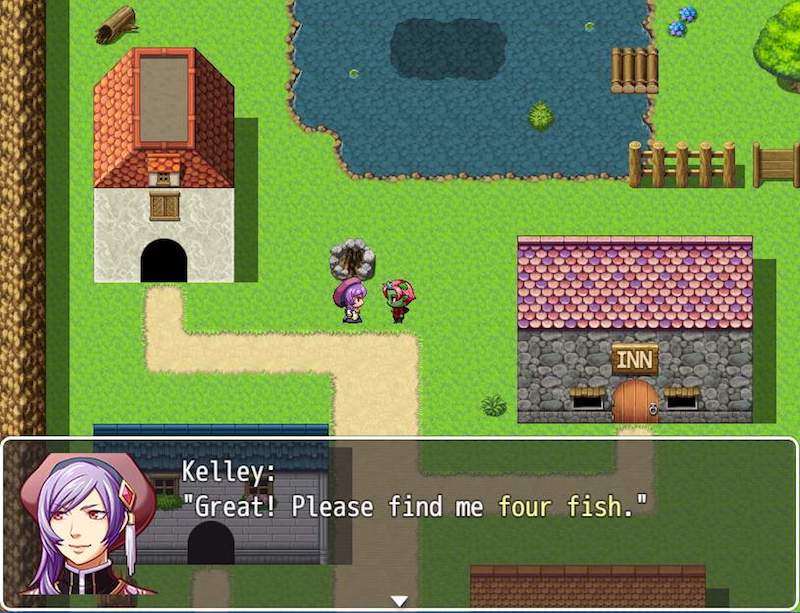 Level blueprints are used to establish where everything in a level will be placed; they’re the foundation of a great project.

The information included in the level blueprints should help the developer clearly recreate maps in their game.

We will be honest—this is a lot of info!

But for the sake of level-setting, know that there is even more that needs to be digested on the way to completing a game with RPG Maker—from game mechanics, game space, map transfers, story creation, publishing a game online, and more.

This fact isn't meant to scare anyone off from building their own game, but more to excite and inspire—there is so much that can be accomplished...the depths and limits of which extend beyond that of a single useful blog post!

If you have a child interested in diving into the details, check out our video game summer camps held at a number of our 150+ locations worldwide.

iD Tech is the world's #1 summer technology camp for kids and teens. We're in the business of providing unforgettable summer tech experiences and inspiring the next generation of coders, app developers, engineers, and innovators.

iD Tech is the #1 tech camp on the planet, with 150+ global locations - held at Stanford, NYU, Cambridge, and more - and 50+ innovative tech courses.